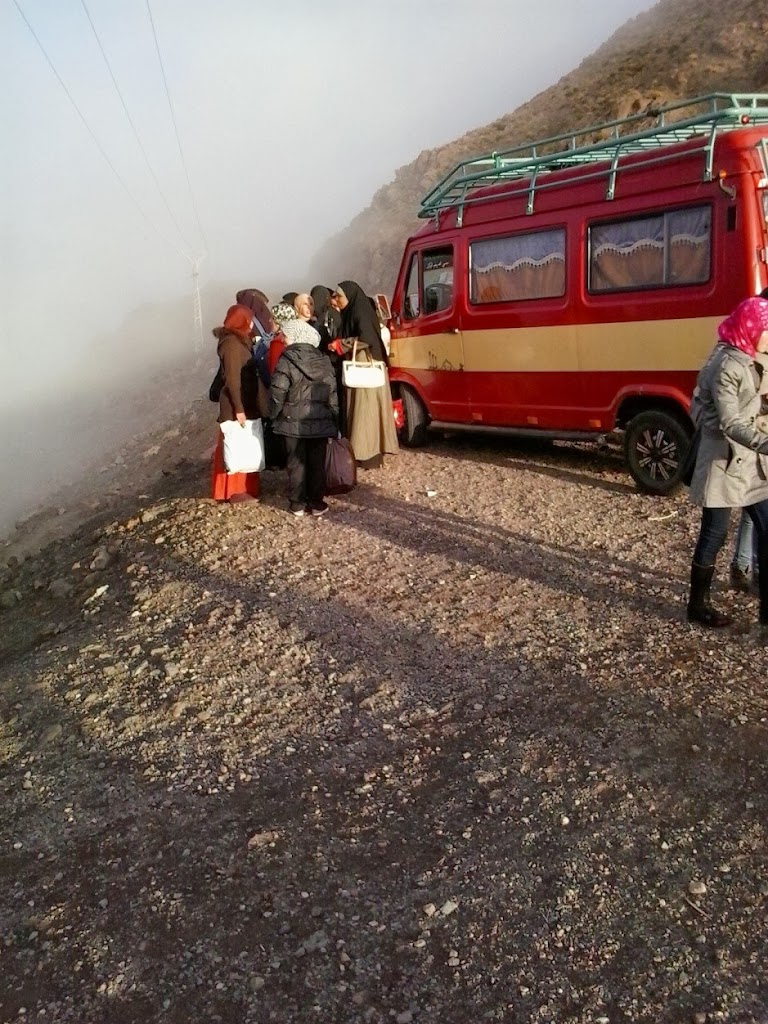 We walked the walk….
The French NGO ‘Aide et Action’ have made a documentary film, ‘Sur le chemin de l’école’, following four children in four countries as they make their difficult journeys to school.  One of the children is Zahira, who lives in Tinghrouin, a village in the Imlil valley.  Her school is in Asni, and in order to go to secondary school, she stays in an Aide et Action hostel in Asni during the week, as do the girls in the four Education For All houses.
While I was in Asni, working with the girls in Dar Asni 1, Aide et Actionorganised a women’s walk to Zahira’s village; the plan was to replicate Zahira’s Monday morning journey from her home to Asni: a journey of 22 kms taking 4 hours.  A party of 30 women and girls, and one man, we left from Asni on Saturday afternoon.  Buses took us just beyond Imlil, and from there we had to walk down the steep mountain side to the village of Tinghrouin, in the narrow river valley.  The path was not easy, and towards the end of the trek we were making our way along a goat track in the dark – with some trepidation!  The lights of the village down below seemed a long way off as dusk fell, but we arrived safely with help from the villagers sent up to guide us. 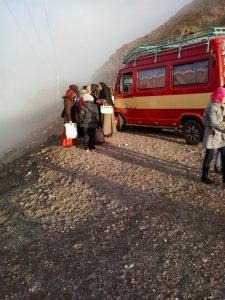 We were given a wonderful welcome as we arrived in the village: mint tea at first, of course, then meat brochettes and bread, and later in the evening another meal of couscous.  We spent the night in the village; we all found a place to sleep, warm blankets were passed around, and we had a comfortable night in various rooms, and early in the morning our hosts were up preparing a wonderful breakfast for us before our long trek back up the mountainside back to Asni. 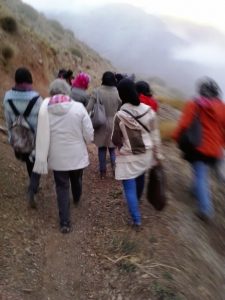 But the event was designed to discuss and to celebrate the courage of the girls who currently make that trek every week, and after we had eaten and rested that evening there was a moving women’s meeting, involving teenage girls currently at school, village women who had not had the chance of education and us, the visitors with a range of different lives and opportunities. The meeting was very moving, with testimonies from a wide range of women and girls explaining their hopes and ambitions and describing the problems they had encountered and were encountering ‘Sur le chemin de l’école’.
This is an extract from a description I wrote when I got back the next day:
At first the girls were in high spirits and started to sing together and the women passed around very domestic musical instruments – the woman next to me had two spoons on a tin tray and was very accomplished and another woman had a plastic bucket – the rhythm section was well practised. The girls sang, ululated, danced and clearly everyone was high on the event itself.
But after quite a while, Ghislaine, the leader, took over and the talking began… One of the girls, Naima, a lead singer encouraged by all, was invited to tell her story.  She is 15 years old and has a great deal of presence.  She is the only girl from her village to go to secondary school and told her story of how difficult it had been to persuade her family to let her go.   Now she is the only girl of her age in the village who is not married – and doesn’t want to get married until she has finished her education.  And her ambition is to be a primary school teacher.  As her story unfolded and the questions came from the outsiders, clearly she became more and more emotional and eventually tearful as she recounted her difficulties.  She stood amidst the very supportive girls, tearful but strong, as the questions continued – it was remarkably moving.  And it didn’t end there.  Naima was the first strong girl to tell her tale.  There were many others, girls who had insisted on continuing their education despite opposition from parents, brothers, pressure to get married.  They stated their ambitions – many wanted to become teachers to carry on the work, some teachers of Islam, some health workers and one to be a lawyer.  The issue of marriage was raised and they hesitated, clearly something that was constantly on their mind, and replied cautiously that they wanted to continue their education, but it seemed that a lot of social pressure had been applied already.  Other grown women spoke up, Zahira and her grandmother very movingly – grandmother spoke of her childhood looking after the cattle and working in the forest, going to mosque illiterate and without understanding the words spoken, saying how important that her granddaughter should not go through what she had been through.  Many of the women in the room spoke, some of whom were now employed by Aide et Action in one of their foyers.  They spoke of having to complete their education under conditions of great hardship, having to travel to school and having to complete education in later life, having to find the money or the time.  One woman whose father had wanted her to be educated was, at 6 years old, the only girl in the primary school.  The teacher sent her to the back of the class because she was only a girl, but she remembered turning up the next day and sitting at the front again.  She was later abused at school by the boys and the teacher, and could not tell us about it.
Translation was not easy, emotions were high, the room was very hot, and three languages were being used: Berber, Arabic and French.  When the French became dominant one of the women from the village got up to leave but was persuaded to stay as testimonies were drawn in Berber about local women’s experience.  Tears were shed, applause greeted many many emotional testimonies, there was much evidence of affection and sympathy – a rolled up tissue sent flying across the room to a tearful girl, a hug, pats on the shoulder… Difficult to sit through without empathising with so many of these testimonies given without dramatic or theatrical rendition, simply an accounting of the facts as experienced, possibly never before recounted in front of a sympathetic audience, so that gradually the speaker recalled and realised that the problems had indeed been great and she had indeed surmounted them and it really hadn’t been easy. 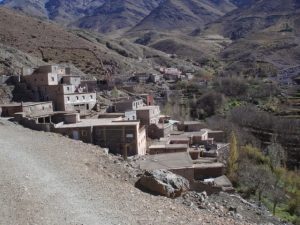 These girls are the exception: for most village girls, education ends with primary school.  It has been a privilege to be a small brief part of the lives of these brave strong girls and their mothers.  So many aspects of village life will be improved when these girls are educated and empowered to take a leading role in the development of Morocco. 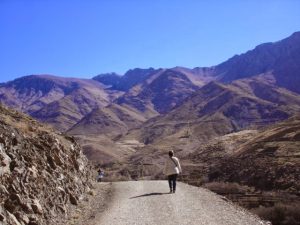 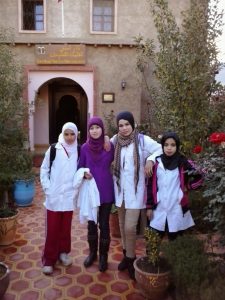