Skip to content
I arrived in Morocco the same day as the girls returned from their summer holiday. I was to stay in Dar Asni the first week then move up to Dar Tinmel the following, so I was kept very busy trying to learn the Khadija’s from the Fatima’s, as well as attempting oragami in order for me to teach them and painting one of the outer walls with handprints, as well as the token Scottish flag. The week flew by, all the new experiences blurring into one every passing day, like the language and food which were probably my two biggest hurdles and before I knew it I was on the winding road up to Talat N’Yacoub, a small, isolated burber village 50km deeper into the Atlas Mountains. 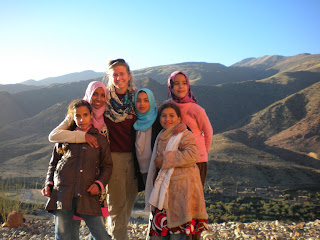 From then on everything was full steam ahead, I started to love the food (probably due to Khadija, the brilliant cook) and I managed to communicate with the girls with basic hand signals and broken French, or “Franglais” as I have recently heard it called. Everyone was very welcoming and soon I had got into my daily routine, this included a daily walk, sometimes on my own but usually with the girls, all bickering over who got to listen to my iPod! It was on these walks that I really got to know the girls and I was able to differentiate between the loud and the quiet, the cuddly and the independent, the cheeky and the shy- but most importantly they were all lovely, even when they were shouting at me (thinking the louder they say something the more likely I was to understand it, gradually most of them realised this wasn’t the case and gave up after a blank look and shrug of my shoulders!) 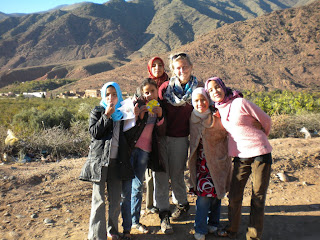 With 20 girls, 12 of them new and none of them having ever studied English I decided to start a programme called “English with Eily,” making 20 individual booklets containing the likes of numbers, the alphabet, weekdays, months, food, clothing etc. and I like the girls take charge of their individual cover designs. To encourage them further and to enable me to follow their progress I made a chart with the girls names and different topics we would cover, after a topic is complete the girl receives a tick, bringing a healthy touch of competition to the learning process. That is one thing I have noticed particularly about the attitudes of the girls here, they are all so willing and wanting to learn, wanting to prove themselves. Today for example I was sitting out on the Terrace with one girl who has been particularly struggling and we got through the alphabet, numbers (to 20), weekdays, months and animals, I was very proud!

In the evenings I have done some other activities with the girls, other than just English, teaching them to make origami fish (my speciality) and origami stars, a slightly more challenging and fiddly process which lead to me making 20 origami stars for 20 very confused little faces. Simpler tasks have been making snowflakes and tissue paper flowers which now line the walls. I have also taught them games, like Heads Down, Thumbs Up (a personal favourite) and uno, which was exhausting to say the least! The girls all love to sing, so I have attempted to teach them a couple of songs and hand jibes, and in return they have taught me a few more difficult ones that involve ducking down and concentrating hard! 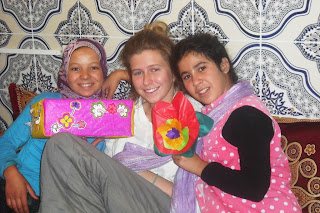 The Terrace is beautiful and a place I have spent a lot of my time, the sun shines daily. Whether it be playing hopscotch which the girls, reading or listening to music (often with one of the girls who had come up and sweetly asked “musique, s’il vous plait Eily”). One afternoon I noticed the bare walls of the terrace and decided to paint the names of the girls along one wall, so they could do their hand-prints underneath. Hopefully in the following years it will become a tradition and the walls will be covered with lots of little hand-prints of the girls. 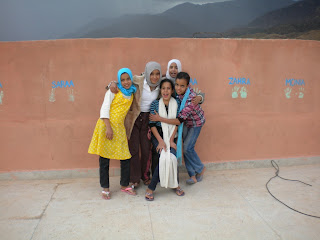 I have really enjoyed my time at Dar Tinmel, and although it has been difficult at times, being so isolated from everything I am familar with; the girls are so affectionate they make you feel as though you are really part of their community. I have also managed to pick up a little bit of the local language, which gets a lot of laughs. I hope the girls have gained something from me, as I have from them. Hopefully one day I will return to see their transformation from catipillars to the beautiful butterflies they are on the path to becoming.
Eily Craig