Skip to content
After several invitations from Khadija Id Ahmed Ouali (a girl studying at Dar Asni) to spend the weekend in Imsker, I have finally accepted.

First of all, we went to Imsker the Saturday morning after school by what they called “the transport”… The transport is in fact a truck and we were Khadija, Fatima Zahra and me, behind, mixed to the other persons and their races. Imsker is at about from Asni but the road is really narrow and sinuous: I had the impression that I made rodeo during the road, it was really funny!

Upon our arrival we had a rest and I got acquainted of all the Id Ahmed Ouali family and also the animals… Yes! They have got two cows, three goats and a lot of chickens. Khadija’s mother also learnt me to milk the cow…well, she tried… 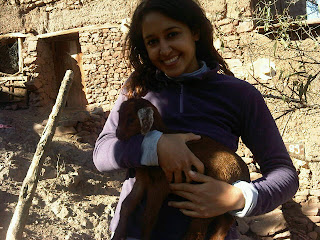 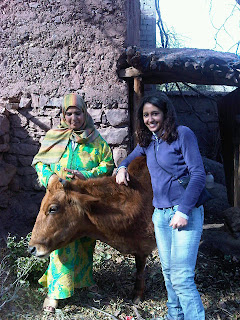 I was also amazed to see that they were cooking in a wood stove fed by branches collected at the top of the mountain (and transported on the back!). I spoke a long time with Khadija’s mother who explained to me how life was before, without water and electricity.

Even if life in the mountains is rather difficult, people show solidarity and are very smiling. I was disconnected from everything!

On Sunday, Khadija and I visited her family where we danced a little on Berber songs. Finally, we went to the river where the women of the villag e wash their linen. We were far from the modern washing machine with its economic program at !!!

We have taken advantage of this day to make family photos near the river; the air was fresh and pure. At night, Khadija made some bread filled with peppers, onions, liver and fat of sheep: it was delicious! We looked at photos in the family album and discussed for a long time with Khadija’s mother. This weekend was really enriching for me and I thank Khadija and her family for having welcomed me so well. 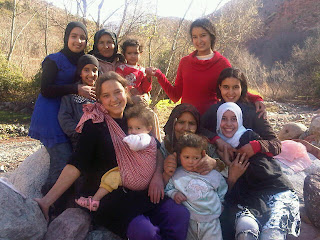 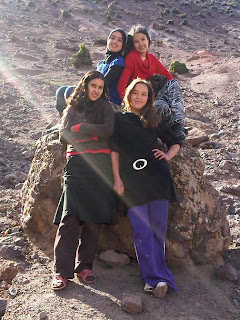