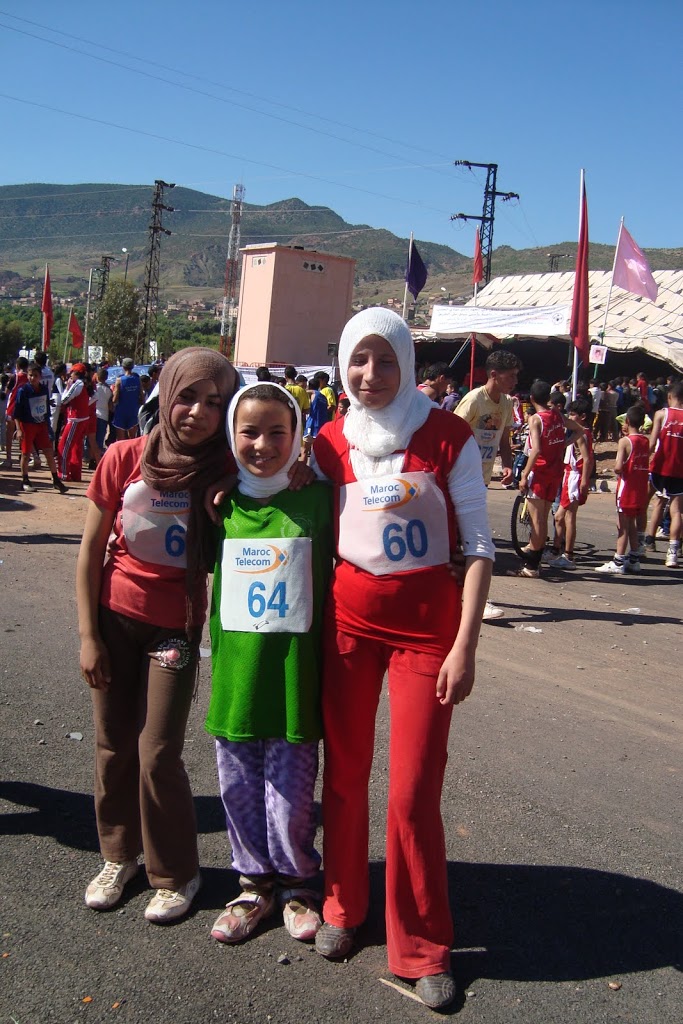 On Sunday 8th May 15 of the girls from Dar Asni took part in a , organised by the Kasbah Tamadot and Kasbah Du Toubkal. The girls ran/ walked 8Km and men ran 19Km. It was said to be a great event and created lots of excitement throughout the whole valley.
The fastest girl at Dar Asni was Zahra Amizl, 1st Lesse, and she came 5th out of all the girls. The girls where all very stiff the next day, the girls who did not race found it very amusing to watch them all hobbling around. However the pain was worth it as the three fastest girls, Zahra, Sanna Ait Omar and Fatiha Id Ali, will be getting a trip to Marrakech thanks to of Mother Latifa. This is to encourage all the girls to take part next year. A big well done too all the girls who took part. 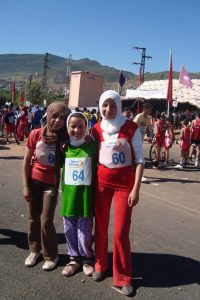 I unfortunately did not get to see the marathon as I was at one of the girls house, Fatiha Bouchaka, who is in first collage and has very little english. This was a good chance for me to practice my new tashlahid skills. This was not the first time I had been to a girls house and so I thought I knew what to expect. However after 3 hours in the back of a crowed van I knew I was going to be higher and further away from Asni then before. Then we carried on climbing up a rocky path. Finally we turned a corner and I got my first sight of her village, Tachdirt. It was spectacular! As i got closer I could see that there where several gites in the village. I asked Fatiha about this and she explained through many hand movements and 4 different languages that Tachdirt is on the popular trekking rout from Imlil to Oukaimden. She also explained that “tomorrow we will be walking to Oukaimden”. I was wondering how i was going to cope wearing only small impractical shoes, when I decided that I must have not understood her properly. I soon forgot about this though when I reached the house and was introduced to her mother and father. We had the traditional mint tea followed by a tajeen. We pasted Saturday afternoon by lazing around watching TV and taking a stroll around the village. Then to bed early after another lovely tajeen. This is the sort of weekend I was expecting and wanted after a hard weeks gardening but it wasn’t to last.

Just as the sun was peaking out from behind the mountains and the birds where starting to sing, it was time to get up. This was very early for a Sunday, all the other times the girls have had a nice lie in. It soon came apparent to me why we where up so early, we were walking to Oukaïmeden. So after a hearty breakfast Fatiha, Rokaya and I where on our way.

Just a little further up the path we saw tourists and the girls decided it would be good fun to catch them up. So off we went running up the mountain side. When we caught them up they were shocked to see us, all rapped up warm in little shoes no bag and only a small amount of water. This is understandable as they, looking most other people who trek in the mountains, had shorts and T-shirts on, walking boot and a big bag full of water, food and other emergency equipment. They where even more shocked when I told them we would be going to Oukaïmeden and back in a day. It is about 17km to Oukaïmeden up and over a pass and then back down the other side to get the bottom of the barrage at the bottom of the valley.
We said good bye to the tourists who were having a sit and carried on walking up in sun surrounded by beautiful snow capped mountains. After several hours of walking we all of a sudden reached the pass over and there in front of us was the . It was stunning completely different from Jenny’s snowy pictures of the day trip. The valley was green with new growth and there where wild flowers everywhere. As we walked down surrounded by vibrant greens, yellows, pinks and blues, I watched the butterflies flapping around and felt at peace. 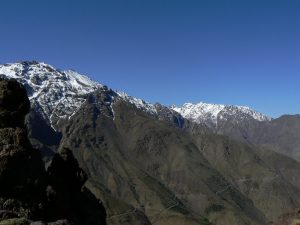 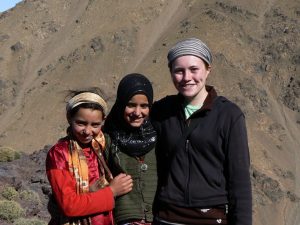 In the basin of the valley was the lake and barrage. It looked like a painting with the clear blue water, green mountain sides and bright yellow daffodils. The closer we got the more wonderful it became. A strange noise was coming from the lake; we were all wonder what it was, as we drew closer to the edge the ground leaped up. There were hundreds of bright green frogs sunbathing in the grass desperate to escape our approach by jumping into the water. That is when I realised what all the noise was, hidden by the flowers around the edge of the water was thousands of frogs all singing their mating call. After a stroll around the lake and many pictures at the barrage we went to Rokaya’s brother’s house for lunch. And then we started the long walk back up the mountain and down the other side. We where all so tired when we got back that we went straight to sleep. It was such a wonderful day and I was so glad that I had done it even if I was tired and stiff the next morning. 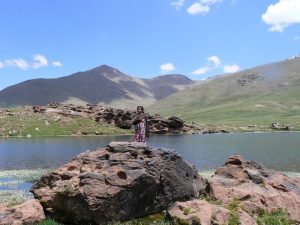 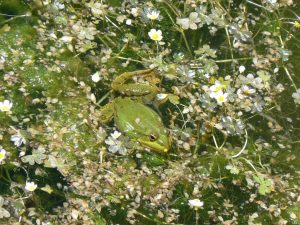